The Legend of Ol’ Pondy

Pilot KC Poehler and his plane on one of his many adventures in Montana.

Cathy Ritter is a pilot. She grew up around airplanes. Her father was also a pilot. Flying runs so thick in the family’s blood that she had her pilot’s license before her driver’s license.

While planes and chainsaws might not seem like natural companions, Ritter’s family has a favorite story about how their trusty Stihl chainsaw proved a reliable co-pilot one summer in northern Montana.

Years ago, Ritter’s father landed his plane at a particularly precarious landing strip in Moose City, which is really just a small cluster of cabins in Montana. The property is nestled in the heroic landscape beside Glacier National Park, near the U.S.-Canadian border.

While the landscape itself is heroic, the grassy landing strip itself was not. It was book-ended by obstacles. On one end was a bog. The other end saw a beaver pond, its air space obstructed by a massive Ponderosa pine.

Needless to say, landing conditions were less than ideal for the pilots who braved the strip. Avoiding the bog, on the one hand, the pilots likewise had to quickly ascend in order to miss “Ol’ Pondy.”

Ol’ Pondy was more than 30” in diameter, and it only got taller and taller by the day, proving an increasingly treacherous obstacle for the pilots. Fortunately, Ritter’s husband had a Stihl chainsaw. Deciding enough was enough, they made short work of Ol’ Pondy with their Stihl.

As the legend goes, even the beavers stared in amazement as the massive tree fell.

From that hot August afternoon onward, pilots could climb into the majestic azure-like blue without worries of Ol’ Pondy clipping their wings.

Today, Cathy’s daughter, Carrie, is a proud member of the Murdoch’s team of employees. And, you guessed it: Carrie is married to a pilot who swears by holstering Stihl products for those make-or-break moments in life.

Pilot KC Poehler and his plane on one of his many adventures in Montana. KC is Cathy Ritter’s father, and grandfather to one of Murdoch’s team members. 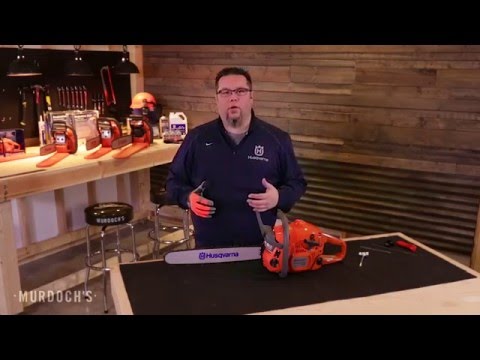 How To Sharpen Husqvarna Chainsaw Chains

The inside scoop: How to double your warranty on power equipment

Remember That Time You Needed a Snow Blower? It’s Called Winter. And It’s Back.