Dwain and Lillian Rennaker are humble folks. Nestled within the Bitterroot Valley near Hamilton, Montana, they operate a cattle brokerage on the same ranch Dwain grew up on seventy-odd years ago. The terrain on their property is nothing short of majestic with a rugged, naturally gnarled personality that seems to have seeped right into Dwain’s skin.

When they welcomed me to their ranch, the wildflowers were bursting open, adding a colorful flair to an otherwise dry, matter-of-fact weekday. “Do you see all of those, Maria?” Dwain asked as we climbed the hillside in his new HiSun UTV. “That there is antelope brush. It hasn’t bloomed yet, but that whole thing will be yellow soon.” He started pointing out all of the different varieties, as if he knew where each flower popped up every year: balsamroot, black-eyed Susans, shooting stars. “I’ve never seen the wildflowers out as early as they are. It’s too dry for this time of year, Maria. It’s too dry,” he explained to me.

As the minutes I spent with them quickly turned into hours, I realized that their hospitable nature was so much more honest than I was expecting. It wasn’t that I had low expectations of the Rennakers. Quite to the contrary, I expected them to be experts in the cattle industry. Their family’s reputation in Montana falls nothing short of respectable folks whose word is worth its weight in gold.

After all, Dwain holds a place in the Montana Cowboy Hall of Fame, and you just don’t make your way into Halls of Fame if you can’t pass a basic authenticity test. No, sir. Dwain is an honest cowboy. But I suppose I expected him to laugh at me for wanting to interview him and film him using his UTV, as he was Murdoch’s first customer to purchase one of these new items in our stores. It would have been easy for him to say thanks, but no thanks. Instead, in his neighborly way, he said sure, and I’ll give you a tour of my place, too.

So, off we went with Lillian behind the wheel to visit a herd he will keep pastured and sell this fall. We went up Bald Hill and around the two water tanks, past the land he wishes he would have taken an option to buy, and over to feed Cool. At one point the Rennakers had more than 70 horses. Today, Lillian says, Cool is Dwain’s favorite of the few that are left.

We motored over to what used to be his rodeo arena where, back in the day, they would haul bleachers from the school football stadium and ride rough stock. The lights are gone now, as are the cowboys and fans. “I wish I could have rodeo-ed longer,” he told me as memories clearly rushed across his mind. “I miss it. It gets in your blood.” Dwain told me about one year when he didn’t get bucked at all, and the following year when only one bronc threw him. Then, he rattled what seemed to be a complete list of all the bulls and broncs he’d ever ridden.

When I asked him why he felt like he had to work so hard, for so long, and continue to labor like he does, he didn’t hesitate for a moment. “For my family,” he said, and it was the only time during the nearly three hours we spent together that I felt like I had asked an obviously silly question. In hindsight, he’s right. I did already know his answer. Nonetheless, he gave me a good-bye hug like only a grandpa could. And I drove away missing mine.

What to Wear to a County Fair

The inside scoop: How to double your warranty on power equipment 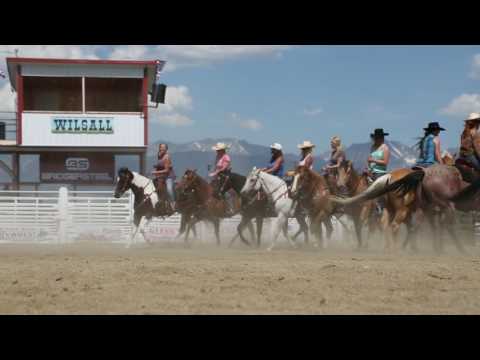 Sights and Sounds of the Wilsall Rodeo